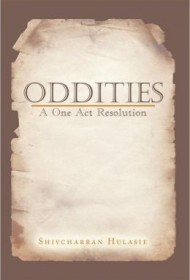 Oddities is a fanciful sort of mystery or morality play, leaning toward the metaphysical. Like the dramas of medieval times (including Everyman, the most famous) it strives to illustrate mankind’s precarious spiritual balance in the midst of adversity and conflicting emotions and attitudes.

Shivcharran Hulasie employs characters with symbolic names, such as Somber, Riot, The Founder, Cavalier and Ponder. The story begins with The Founder (Mankind) emotionally spent, holding a bottle of liquor in one hand, and a gun to commit suicide in the other. He waxes on (ad infinitum) describing his predicament and considering that final act of disillusionment. Eventually, The Bearer of Burdens (The Messiah) and Death appear, to either alleviate or precipitate The Founder’s quandary.

In the meantime, aspects of humanity’s spiritual mix — Passive, the previously mentioned Riot, Ponder, et al — have become keenly aware of this ominous lack of balance in the universe and debate the best plan of action to forestall The Founder’s untimely demise and subsequent end of civilization.

Hulasie imbues the piece with playful, comedic elements. The sometimes-colloquial language and blue-collar humor, the bickering amongst the various aspects of the human psyche, help lighten up a play that is somewhat over-burdened with searching, intensely melancholy rhetoric.

Sometimes Hulasie’s poetic diction is appealing; other times the density of language can be distracting and excessive (as is the all-caps text). For example, “MANY ARE THESE VOICES VYING, FOR THAT SECPTER [sic] FOR EVENTUAL SPEAKING AND ACTION. THEY SAY I LOVE YOU, BUT THEY SKIN ME.” There’s a lugubriousness to Oddities that hinders accessibility

Hulasie would do well to simplify the language, trimming some abstractions and oratorical diction without losing the occasionally exquisite lyricism. He could also easily enliven the action without leaning so heavily on allegory.

Oddities reads like an early draft, but if Hulasie dials back the high-flown language, his intuitive gift for expressing man’s eternal yearning for grace holds great promise.