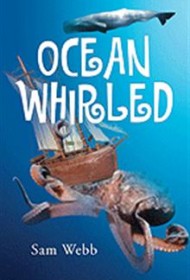 Sam Webb’s fantasy novel revolves around a mythical ocean creature and his quest to protect his habitat and find others of his kind.

Penure, the protagonist, is a N’harmae, an underwater race that possesses both human and dolphin characteristics. The N’harmae have long been caretakers of the ocean, but malevolent alien invaders, the Vi’red, have devastated the N’harmae population and other ocean creatures.

The dolphin pod that raised Penure sends him to meet the powerful octopus Ossnar, hoping Ossnar will help Penure find other N’harmae and save the ocean from the Vi’red. Joining Penure on his quest are a sperm whale and a manta ray, among others.

Meanwhile, a girl named K’noko lives on a nearby island. Her sick mother, Marni, departs on a ship, hoping to find a cure for her illness. After waiting fruitlessly for Marni’s return, K’noko sets off to find her and discovers a shocking truth about their ancestry. Eventually, Penure and K’noko cross paths, and they join to fight the Vi’red in the sea and some villainous humans on land.

Despite the plot’s virtues, the story suffers from several flaws. The narrative is hampered by Webb’s frequent use of run-on sentences, which make difficult reading.

In addition, Ocean Whirled isn’t consistent on the reader it is intended to attract. The Vi’red plot thread of Ocean Whirled might appeal to a middle-reader audience; its grotesque, one-dimensional villains and quirky sea-creature heroes are the kinds of characters popular with young readers.

However, K’noko’s search for Marni raises heavier subjects, including sexual exploitation and unintended pregnancy. Though handled non-explicitly, these situations are too mature for young readers who would enjoy the undersea characters. While such subjects might attract an adult audience, adult readers generally prefer more complexity in their stories.

In all, Ocean Whirled is adrift at sea: It doesn’t have the right mix of plot ingredients — or technical polish — to target a solid audience, despite its interesting premise.