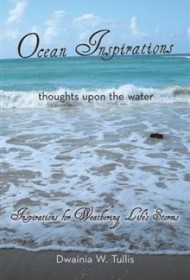 There’s something in many of us that urges us to seek a home in the universe, something often mystical that takes us inward to the heart of our Being and outward to the interplay of force and meaning that stretches beyond our fingertips and into the stars themselves.

Dwainia W. Tullis’ short book of poems and photographs, Ocean Inspirations, is just such an effort. Tullis writes with a generosity of spirit, offering a sort of rolling eternity in which the individual both loses and finds him- or herself. In “The Ocean,” for example, the ocean serves as a metaphor for all that we are part of but seldom take the time to notice: “As the ocean is with water, so is God with us.” When Tullis writes in another piece that “The sun rises everyday and it is free! / The air we breathe, the wind we feel is free,” she is reaching for something difficult to grasp: “Mankind did not create any of this. How forgetful of us!”

This is a reminder of a kind of perennial wisdom often associated with Buddhism and New Age consciousness-raising, a call to our better nature. The risk in attempting to plumb these sorts of psychic and mystic depths, however, is that in reaching for the ineffable, the prose can fall into New Age clichés and shapeless abstractions, a pitfall Tullis has not avoided here. Lines like “This new awareness leads to wonderful experiences that bring us into the wonders of creation” may tell us how we are supposed to feel but do little to move us into that feeling.

Tullis seems to be finding her voice here. A judicious pruning of cliché and abstraction accompanied with a renewed effort at capturing, in telling detail, the depth of feeling she wants to convey would go a long way in making a more powerful book.