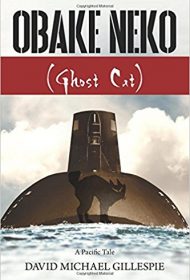 The book opens two weeks after WWII’s end, when a raft of shipwrecked U.S. airmen led by pilot Bud Brennan encounters a huge Japanese submarine. The sub’s only marking is the silhouetted image of a cat. Bud is later rescued by a U.S. submarine crew—alone, without his men but apparently healthy and hydrated—and says he doesn’t remember what happened.

Then the story moves to present-day Hawaii, where Mike Brennan lives with his father Bud and his Japanese father-in-law. Brennan is a somewhat nerdy business consultant with a penchant for analysis and list-making who recently lost his wife to illness.

The book shifts between 1945 and 2000, when Bud Brennan is arrested breaking into a submarine museum at Pearl Harbor but won’t explain what he was seeking, or why. Mike works to understand his father’s actions before the authorities lock up his dad. Eventually, the story leads Mike to dangerous Yakuza gangsters who want his father’s secrets and are willing to kill for them, and to other South Pacific islands, including Guam, Palau and Tinian.

Gillespie is a talented writer with an ear for realistic dialogue. Even better, he’s an obvious stickler for research. His familiarity with Hawaii and Hawaiian culture is deep and believable (he’s lived there since he was a teenager), and passages describing the US and Japanese military are richly detailed without being overwhelming. The giant submarine painted with the cat logo comes vividly to life as it takes on a secret mission to pick up Nazi weapons but flounders before it can complete its return to Japan. And Gillespie introduces a large cast of interesting characters in both Hawaii and Japan, including a secret descendant of an early Hawaiian king.

The plot moves inexorably to a surprise ending when Bud Brennan’s secret is finally revealed. In all, this is a supremely exciting and satisfying read.