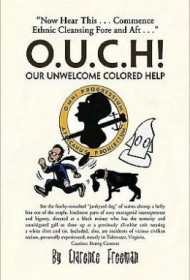 Anyone who spends 30 years inside the federal government will have stories, and Clarence Freeman is no exception. Freeman, an African-American, says he has written O.U.C.H.! to show how society treats black men and to expose racism in the federal workforce.

Freeman writes that during his long career in quality control and methods engineering at the U.S. Naval Station in Norfolk, Va. he was the victim of bigotry that he believes is endemic in the system. His grievances include promotion discrimination, verbal and psychological abuse and a hostile work environment at the hands of white co-workers.

While all this may be true, he could have made a better case with more specifics. He is often fuzzy on details and couches his facts in words such as “probably” and “I believe.” For example, he had one supervisor with whom he had conflicts and whom he believes was rich. He postulates that her wealth may have been the result of her family owning slaves, and that land her family once sold to the government would result in buildings constructed over unmarked slave graves. That is quite a leap.

Freeman tries to lighten the mood with occasional humor in the form of “news reports,” such as recurring accounts on the exploits of David and Goliath (given Freeman’s view of his years as a federal employee, this is an apt construction). But these attempts at satire often fall flat, and the narrative often digresses.

With tighter focus and some documented examples of the wrongs Freeman says he was subjected to — names, dates and other concrete details — this memoir could have been the expose he was aiming for. But as it stands currently, he has missed his target.