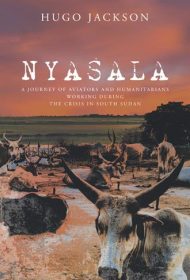 In Nyasala: A Journey of Aviators and Humanitarians Working during the Crisis in South Sudan, Hugo Jackson draws upon his experiences in South Sudan and his work in aviation and humanitarianism to create a jolting novel set during a heart-breaking civil war.

In 2013, President Kiir of the new state of South Sudan and member of the Dinka community accused his vice president Riek Machar, member of the Nuer community, of planning a coup and dismissed him. This sparked a civil war between the Nuers and Dinkas.

In this story, ten-year-old Nyasala, from the Nuer community, hides in a bush trembling as she listens to the deafening sounds of gunshots and crackling fire around her. Only a few people in her village survive the disastrous invasion. As UN humanitarian agencies continue their relief efforts, the story closely follows Nyasala throughout the chaos to reveal the war’s devastation, even as Nyasala’s brother Akol is determined to find her.

The narrative skilfully describes the gruesome nature of the war and the brutality of soldiers, painting a full picture of the cruelty victims suffer in the hands of the perpetrators. In one scene, a soldier walks into a hospital armed with an AK-47 and begins shooting indiscriminately at the patients, whom he calls rebels. When the ordeal is over, not one patient is left alive.

Unfortunately, grammatical errors greatly hinder the work’s effectiveness. Missing or misused punctuation, inconsistent tenses and jumbled sentences abound, as in: “They listened, then detonation which sparked a civil war which had always plagued the youngest nation which didn’t last for 30 months…” or “she would be able to be jumped out of the window.”

Nyasala is a moving novel highlighting the fight for survival by locals and the bravery of humanitarians in a war-torn country. However, closer editing is necessary for it to reach its full potential.