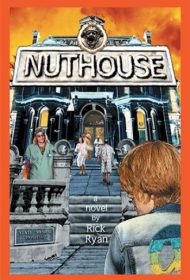 Rick Ryan’s Nuthouse is a coming-of-age novel centered on a teenaged protagonist and set in 1970.

When a young woman he’s just met gives 17-year-old Mike Ridley LSD, it leads to a bad trip. Although Mike recovers, the nightmare stays with him, coloring every experience and destroying his self-esteem and ambition. He’s unable to move on until his friend Pete Murray lands him a job at the Arizona state mental hospital.

Mike’s work on the wards teaches him compassion and responsibility. Nonetheless, he remains haunted by his acid trip—until meeting Taza, an inmate involuntarily committed after severe hallucinations due to a bad peyote experience. Dedicated to the year of silence demanded by his Apache spiritual training, Taza is considered catatonic. Through Taza, Mike discovers he, too, is on a path to spiritual enlightenment. Eventually, Mike helps Taza and Aimee, another inmate, escape to the mountains, where they continue their spiritual journeys.

This is an interesting plot that is largely well-written, with a few notable exceptions: Ryan’s characterization of Taza and Mike can be lacking at times. Often dialogue revealing their characters is rushed and rings false. And although Pete introduces Mike to the life of Buddha, triggering Mike’s growth in compassion, Pete is also a destructive force, manipulating an inmate in a prank on a fellow staff member. Several chapters featuring Taza’s parents could have easily been removed.

Additionally, in what might be deemed cultural appropriation or an example of white superiority, Taza is a Caucasian man chosen by his Apache teacher, Old Voice, to become his people’s new spiritual leader. However, Ryan may have simply wanted to avoid inevitable comparisons to Ken Kesey’s One Flew Over the Cuckoo’s Nest, in which a Native American character chooses not to speak.

Despite its shortcomings, Nuthouse offers engaging moments and may satisfy those who lived through the drug-hazed 1960s and ’70s, or young people, like Mike, growing to maturity and stretching their wings.