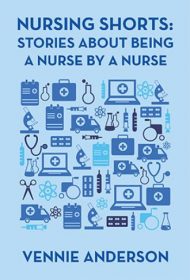 In Vennie Anderson’s collection of essays, Nursing Shorts, the author shares memories of her life as a nurse in the days when the profession didn’t garner the respect it deserved.

In the early 1960s when Anderson announced her plans to be a nurse, she was told, “But you’re too smart to be a nurse!” Despite already logging several years as a candy-striper and nurse’s aide, work she truly enjoyed, she gave in and set out for a career in teaching. But she soon realized her mistake and changed course to obtain a nursing degree.

Her recollections cover a lot of ground, from the days when serial killer Richard Speck preyed on student nurses in Chicago—frightening nurses everywhere—to her experience of nearly fainting while attending a surgery, which convinced her that she didn’t want to be an OR nurse to the stigma of being a nurse in the 1960s, and more.

In “Cold Treatment,” she describes using ice sheets to bring a frail woman’s temperature down from 108°, even as the woman begged her to stop. In “Liar,” she recounts helping deliver a stillborn baby and the doctor’s cruel words to the mother, telling her bluntly (and incorrectly) that the baby died because she was too fat. And in “Anything but Turkey in the Straw,” she teaches a patient in a psychiatric hospital to play piano, though not everyone appreciates his talent.

These are engaging, easy-to-read tales grounded in interesting detail about the nursing profession as it was, and how it has evolved into a much respected, critical component of the health care system. Anderson’s stories, told in a straightforward manner without contrivance, reflect her compassion and gentle sense of humor, making her a sympathetic figure that readers will easily relate to.

Her book is likely to be enjoyed widely by readers, who will come away with new appreciation for the dedication and emotional investment required to perform this job, then and now.