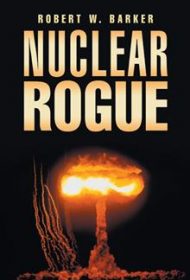 A group of hardline Russian communists, led by Col. Zakhar Rostov, has stolen a nuclear weapon and transported it to the Arctic wilderness. They plan to launch it from there and take power in the ensuing chaos.

But they hadn’t bargained on Peter and his team setting up camp in the area to explore for gold. Peter is wary of the strangers, who claim to be researching the aurora borealis, and soon finds himself in the middle of an action-packed adventure.

Joining Peter in his effort to foil Rostov’s plot are his lover, Maria Davidoff, who was a battered wife and is now a martial arts expert, and Capt. Dick Durban of the Royal Canadian Mounted Police, whose complicated love life  threatens to compromise his effectiveness.

Barker’s sense of pacing is excellent throughout. Action, suspense and double-crosses are in plentiful supply, but not at the expense of character development or sense of place. Life in Peter’s camp is particularly well drawn, giving a sense of both the challenges and camaraderie he and his colleagues experience. The characters are unusual and intriguing, giving readers a stake in the novel’s outcome. In particular, a scene in which Maria fends off a brutal attacker should inspire cheers.

Nuclear Rogue is a well-executed new entry in the popular international thriller genre. The novel’s last chapter suggests the possibility of a sequel, and its readers are likely to be eager for one.