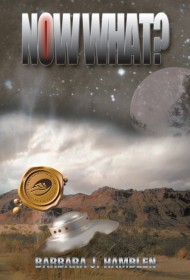 Now What? is a science fiction novel that doesn’t read like science fiction. It reads more like a romance novel with quirky comedy and a plot that happens to involve aliens. Although the story moves along with a fair amount of action, ultimately the book is about human relationships, not space monsters.

The premise is likable: A band of space soldiers for the Universal Federation of Space Command – husband and wife Jorl and Tarla, Jorl’s brother Khair and Tarla’s brother Sarn – are on vacation from their planet, Zalleellia, when their spaceship crashes on an uncharted world. In a Twilight Zone-esque twist, the planet turns out to be Earth, and they have crashed near Las Vegas.

From there, author Barbara J. Hamblen sets up the story to be less “sci” and more ”fi” by making the alien quartet tall, humanoid and handsome (and often funny). They pretend to be foreigners visiting the U.S. for the first time, and the two single Zalleellians fall in love with local women: Eloise, a “gee-whiz” kind of gal, and Carole, who is more reserved and skeptical. The romance novel subplot is set.

The group stumbles upon a plot by aliens from a different planet (who also are beautifully humanoid, only apparently darker) sent to scout Earth for conquest. Add a couple more Earthlings, another Zalleellian, a dog and a cat, and the often improbable story chugs along to a happy ending.

The book is enjoyable but conventional in its romance storyline and writing. With no emphasis on science, Now What? won’t appeal to geeks. And, though Hamblen is a workmanlike writer, she tells most of her story through dialogue, with little scene-setting. That moves the story along, but some readers might miss the descriptive passages that make great literature come alive with rich texture and a vivid sense of place.