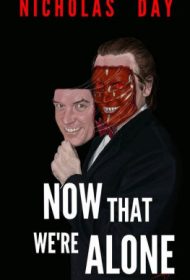 In the Foreword to his story collection, Nicholas Day states that “Now That We’re Alone is “a collage of early works; an opportunity for me to shed some skin.”  As one might expect from early works, these 11 horror stories, ranging from one to 20 pages, are a bit uneven. But when Day is at the top of his game, he’s very good, indeed.

Most of the tales take place in a small Illinois town on the Mississippi River. Frequently, the cold and snow of the Midwestern winters become metaphors for horror and the supernatural.  This is especially true in “The Ghosts in Winter’s Wake” and “Snow Like Lonely Ghosts,” two of the better and more disturbing offerings.

The former concerns the connections between a dead child, the caretaker of the family home and a snowman. The conclusion is unexpected and the horror is not supernatural, yet sad and frightening. In “Snow Like Lonely Ghosts” sugar and snow combine to torture an obese man, as one particularly miserable day brings back painful memories of abuse and death.

There are less impressive stories, such as “Chomp Chomp,” wherein a monstrous turtle eats a popular teenage girl and, years later, feasts on her high school boyfriends; and “Jacks,” in which a childhood toy becomes deadly. These two predictable stories strive to be both funny and frightening and don’t quite hit the mark for either. Still, they show the author’s strong narrative abilities; Day knows how to tell a story.

The book’s highlight is “Beast Mode.” As Day says in his Afterword, it’s his “version of an ultimate ‘B-movie.’” Werewolves take on bikers who specialize in human trafficking in this splatter-fest that channels Joe R. Lansdale’s best early works.

Despite the stories that falter here, this is well worth a read. Fans of the weird and outré will not only enjoy Now That We’re Alone, but they’ll look forward to Day’s next collection.