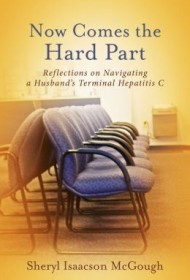 The slow-motion death from a terminal illness is excruciating not only for the ill person but also for the caretaker who watches in horror and helplessness. In this remarkable book, Sheryl Issacson McGough chronicles with unflinching honesty the death of her husband, Jim, from Hepatitis C and her own journey as the “well” spouse.

McGough shows remarkable skill in pacing and spare plot development; the story unfolds naturally and never feels false or maudlin. Readers feel her pain, confusion – and at times anger – as she moves from denial to grief but soldiers on because she cannot fathom doing anything else: “I didn’t realize that the disease that was dismantling my husband, cell by cell, would also dismantle me.” The strength of her writing comes in the poignancy of her love for her husband, who is slipping away from her physically and mentally, a love that leaps off the page.

Wounded in the Vietnam War, Jim was given a blood transfusion in 1971. Unknown then and for the next 40 years, the blood that saved his life was tainted with the Hepatitis C virus. The disease ultimately killed him at age 62.

McGough calls herself a “medical optimist” who at first is sure as they make the rounds to doctor after doctor that there is plenty of time left; that her husband will be with her for years. The heartbreak is the ticking clock of realization that he is much sicker and his decline much faster than she can wrap her heart and mind around. As he applies for government benefits and reluctantly checks the box “terminal,” she writes: “It is one thing for us to hear death knocking at the door; it was quite another that the Social Security Administration could hear it too.”

Such telling details, revealed unblinkingly and without false sentimentality, turn this book into a first class page turner. It is not to be missed.