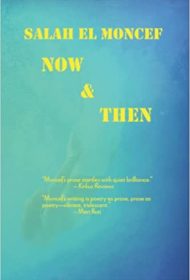 Acclaimed essayist, artist, and fiction writer Salah el Moncef, a Kuwaiti-born professor teaching in France, reflects on the colonized imagination and the possibilities of transnational culture in this highly intelligent and intellectual collection.

The collection begins, unusually, with an introduction by American professor Stephan Watt that discusses the anthology’s two fiction works in relation to el Moncef’s novel The Offering, explaining how the characters “carry with them scars from the worlds in which they live.” A preface to the included story “Benghazi” by Canadian professor Mari Ruti focuses on aspects of the story that some readers might wish to encounter on their own, saving the analysis for later.

In “Benghazi,” Mariam Khaldoon reflects on her school days in Libya, dwelling on a day in 1937 when Mussolini visited her school. The story is full of arresting detail, deep melancholy and powerful language; her father’s death was “the ghost of an unforgettable fracture buried deep in our bones, a throbbing wedge of rage lodged in the depths of our being.” Mariam, though, is less well drawn than the town she moves through, vividly evoked in its markets, public spaces, and the segregated space of her own home.

“The Night Visitor” is equally about the spurs and shapes of memory when the French protagonist, Nausicaa, after being inexplicably drawn to an older man she finds repellant, goes to an astrological reading that leaves her shaken and questioning the foundations of her life. This story feels rougher than the first, full of exposition and explanation, with Nausicaa a less convincing character. The language is still profoundly beautiful, especially in descriptions of the landscape of Brittany, or when Nausicaa, speaking aloud to herself at story’s end, hears her voice “like an echo returning from a cavernous place somewhere behind me.”

Next to this marvelous creative language, the two interpretive essays that complete the book are freighted with academic theory. “A Bridge Too Near” examines the “semiological context” of a banner across a Parisian bridge, and in “The Voice of Exile,” el Moncef explains the motivations of his character Tariq Abbassi, the protagonist of The Offering, in response to a work of criticism not included in the book.

Overall, the individual pieces are carefully wrought and interesting. However, the sheer diversity leads to a lack of cohesiveness and uncertainty about the target audience for this unusual blend of story and academic criticism.