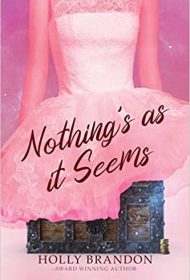 Influenced by her grandmother’s prompting and her cousin, Roxie, who gives Chastity an emoji-guided worksheet to find the perfect guy, Chastity hunts for a husband and the quintessential job. While searching, she begins having recurring dreams of a man with eyes “the color of fresh wisteria” who calls her “Gigi.” The mystery is further intensified by a secret journal she finds from her deceased brother, Charlie, that contains cryptic messages about the same man and his connection to her past. Daphne, her ten-year-old neighbor and clairvoyant, foretells Chastity’s future with a man whose name begins with the letter L, but she offers little other clues to follow.

Chastity’s search for answers leads her to cross paths with all the men she previously dated—including a Frenchman she’s still hung up on, Jacques-Pierre, who left Chastity at the airport gate after she fainted when he proposed.

The series of incidents that follow are equally witty and humorous. Brandon’s eccentric cast of characters includes her martini-tippling grandmother; Roxie’s stepbrother, Brent, who is Chastity’s self-appointed sex coach; and her Uncle Mason, who offers Chastity inappropriate, yet funny dating advice. Most were introduced in the first book, and all provide ample humor, while the narrative’s energetic pace keeps readers on edge of their seats.

However, the frenetic pace also proves challenging initially when combined with incongruous transitions that may leave readers struggling to ascertain the book’s plot and the characters’ motives. Although the story later smooths out, the wait may prove too long for some readers. The book concludes with a cliffhanger, luring readers into an even longer journey.

Lovers of romance will find Chastity amusing and realistic, but they will need to exercise patience to reach the book’s satisfying conclusion.