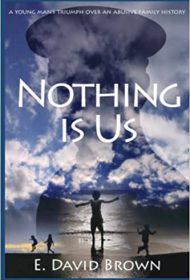 E. David Brown’s new memoir follows his coming-of-age through the lens of his relationship with his abusive father.

Brown’s father, a lieutenant colonel in the U.S. Air Force, is domineering and rage-filled. He claims he doesn’t want Brown and his siblings to make the same mistakes he made, and seems to think that vicious physical and verbal abuse will achieve that goal.

As a result, Brown never backs down from a fight or a chance to stick it to authority figures, many of whom are as dismissive and brutal as the “Colonel.” In Texas, where the family has settled, the author drifts into the 1960s and 1970s counterculture. This leads to trouble with the law – and to a brief, ill-fated stint in the Navy. As the memoir ends, Brown travels to Europe with a friend and appears to finally shake off the Colonel’s hold on him.

Nothing Is Us delivers an undeniable emotional wallop with its vivid descriptions of unrelenting abuse. For instance, the Colonel wraps his watch around his fist before striking Brown, so the risk of breaking the watch will keep him from hitting his son as hard as he’d like.

But at nearly 500 pages, the memoir feels overstuffed. Descriptions of Brown’s friends in Germany, where his father is stationed for a time, and a hotly contested high school student council election, among others, bog the reader down in peripheral details. Cutting this excess would leave more room for authorial reflection. What, for instance, might have been the mistakes from the Colonel’s youth that he’s so intent on keeping his children from repeating? What does the chaos of Brown’s early years mean to him now?

Although Nothing Is Us excels in its immersive depiction of a confused and painful youth, making the above revisions would help it reach more readers in the crowded memoir field.