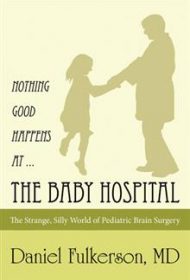 This quirky memoir by pediatric neurosurgeon Daniel Fulkerson packs a punch as he recounts his time in medical school, his early training—including two years with the military in Japan—and his hospital experiences, first with adult patients before moving to the children’s hospital.

Fulkerson describes scores of cases from his long hours in the operating room, enlivening his narrative with skilled dialogue that captures the edgy relationship between very ill patients, their families, and the surgeons and other medical staff. In one scene, he writes of a five-year-old boy who has been accidentally shot in the head.  Fulkerson has just 30 seconds to explain the possible outcomes from surgery, including blindness, to the shocked and confused mother. Their clipped dialogue is weighted with the horrible implications, and Fulkerson shares the thoughts running through his mind at the time, further increasing the impact of their exchange.

The book contains large amounts of medical information, including detailed descriptions of brain tumors: how they behave, ways of treating them, and likely outcomes for patients. At times, readers are peeking over Fulkerson’s shoulder as he conducts complicated emergency brain surgery, accounts that are sometimes quite graphic. The impact, however, is softened by Fulkerson’s irreverent sense of humor, often conveyed with the help of sly footnotes. For example, writing about his early training, he begins “I don’t like to brag …” A footnote then declares: “Editor’s note: total lie.”

Still, nothing can mask the awful sadness of a courageous six-year-old dying from an inoperable brain tumor. Fulkerson takes a philosophical approach to help cope with these tragic cases: “Death is not a shrouded demon with a scythe,” he writes. “Death is the ending of the day, the downing of the sun, the conclusion to the story. Simple as that.”

Even so, you’ll need a few tissues to get you through this insightful, well-written and often uplifting book.