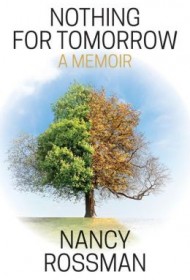 Nothing for Tomorrow is Nancy Rossman’s tribute to an unlikely friendship that proved meaningful in her life.

Rossman was in her mid-20s when she left Ohio and her strong-willed parents, her controlling husband and her infant daughter to begin a new life and career in Arizona. Rossman’s decision to grant primary custody of her daughter, Robin, to her ex-husband shamed her family and rendered Rossman reticent. For years, she hadn’t a single close friend.

At 32, she met Tim, a college student 12 years her junior, who reintroduced her to sex and romance. Although their liaison didn’t stick, Rossman’s relationship with Tim’s mother did, and it is that friendship that dominates her memoir. Lynda, a feisty redhead, pushes Rossman to ramp up her tennis game along with her wardrobe. She plays the role of eccentric aunt to the visiting Robin and later forms a bond with Nancy’s mother as well.

Before meeting Rossman, Lynda had been a horsewoman who spent a decade riding and falling off show jumpers. Her resulting back, neck and spinal injuries worsen over time, leading her to question whether her life is worth living.

Rossman tells their story in polished, well-crafted prose that makes for an effortless read. But while Lynda may have been larger-than-life in person, that doesn’t come across well on the page. The straightforward telling of the women’s shared meals, tennis matches and outings over the years cries out for more emotional depth. “I couldn’t figure out how to be the kind of friend who could help her through the crisis,” Rossman writes, in an all-too-rare introspective passage about Lynda’s struggle with chronic pain.

Despite its shortcomings, the memoir isn’t without moving moments as Rossman tracks Lynda’s slow, painful journey to deliverance. The author’s final act of friendship comes as a poignant grace note at the end, leaving the best for last.