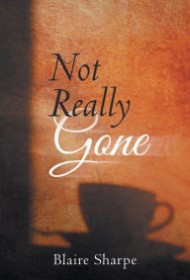 Blaire Sharpe’s memoir Not Really Gone initially appears to focus on how the author dealt with her grandmother’s death. Quickly, though, the story plunges into murkier waters: “Growing up in an alcoholic family,” she writes, “is like being raised in a war zone. Life is, at best, unpredictable. Threats lurk; traps are set; people explode; survival becomes the goal.”

Sharpe leads readers through a childhood marred by her father’s alcoholism and a mother who largely abandons her after not being awarded custody, post-divorce. In one particularly cruel event, Sharpe’s mother, whose fourth husband owned a small airport, suggests young Blaire go outside to see a helicopter land. Blaire sees a body unloaded in a military body bag, and as the wind blows the sheet covering him, she glimpses the dead man’s naked thigh and buttocks, marked by wounds from bullets or shrapnel. She is especially hurt  that her mother knew about the body and deliberately sent her out to witness it alone.

The author also shares her own struggles with addiction and dysfunctional sexual relationships, along with her brother’s mental illness and suicide attempt – and hints at sexual abuse from other family members. Throughout, her grandmother holds the family together as best she can, firm in her unwavering commitment to her loved ones.

Sharpe is a compelling storyteller, especially poignant when describing her grandmother’s dying days. The book would have been better served, however, if the long passage about her grandmother’s health decline had been shortened. This would have allowed her to discuss, in more depth, her own faith conversion and relationship with her second husband, who fathers their three children. The grandmother is presented as a bit too saintly, portrayed through the subjective eyes of a grieving granddaughter.

Nevertheless, this memoir is worth reading. As she ultimately recognizes her value as a survivor and a woman of hard-earned wisdom, Sharpe avoids clichés and jargon to deliver a satisfying read.