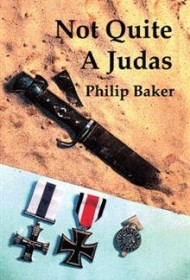 Born during 1927 in England, Philip Baker trained for the Royal Air Force. After WWII, he received a college degree in agriculture and farmed, but began writing for publication around 1960. Interested in the Hitler Youth organizations formed by the Nazis throughout Germany, Baker decided to craft a novel incorporating his knowledge.

Not Quite a Judas opens in the 1930s, as the Nazi Germany threat to England and continental Europe is becoming increasingly obvious. Two teenagers, John Hardwicke of England and Erich Falkenberg of Germany, meet while their families are vacationing in the same locale. The two youths bond quickly and manage to spend time together over several years and across national borders until WWII tears them apart.

Hardwicke narrates the story, decades later, as his grandson, by then a teenager, listens intently. Baker tells the development of the uncommon friendship with sensitivity. Adventures abound, many of them unusual but all of them credible. As the war forces Hardwicke and Falkenberg to consider themselves pro forma enemies, Baker skillfully portrays the iron grip of nationalism across borders until maintaining friendships forged during peace, not war, can be difficult–and maybe treasonous.

Revealing the exact trajectories of the two young men wearing different military uniforms would constitute a spoiler for readers. The scenes of wartime strategy and actual combat are rendered with care and detail, suggesting Not Quite a Judas is a heavily researched novel to provide verisimilitude for readers.

When Baker cuts back to the present day, as his elderly protagonist reveals the unusual friendship to his grandson, the warmth of family ties permeates the pages. Baker knows how to create fictional characters who come alive in this engaging novel.