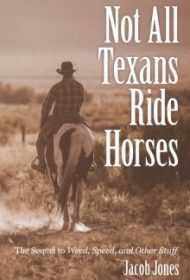 In the Introduction to his memoir, Jacob Jones writes: “We kept our guardian angels so busy. When they saw we were about to get out of bed, they would call for backup.” If every story Jones tells here from his teenage years is true, that’s an understatement.

Jones grew up in Austin, Texas in the ‘50s and ‘60s.  In third grade, his dad taught him to race go-carts. By junior high, he had a driver’s license and a 1950 Ford. In high school, Jones and his friends skipped school, drank beer, raced souped-up cars, and tangled with the police. Jones impregnated two girls. He married one, but divorced right out of high school while still helping to raise his daughter. He didn’t know about his son until the man contacted him 36 years later. (He notes that he regrets the lost years and hopes to forge a relationship with his son today.)

After divorcing, Jones joined the Air Force. To his fellow soldiers’ surprise, he was attracted to “a church lady.” He stopped drinking, started attending church, and they were married. Once back in civilian life, he became a volunteer firefighter and EMT. While the adrenaline rush of lifesaving reminds him of his youth, Jones now believes God is in control. At book’s end, he offers this simple advice: “You can’t get good to get God. You get God to get good.”

The two quotations mentioned are the memoir’s highlights. Written with perspective and a wry sense of humor, they suggest Jones has the potential to be a skilled storyteller. Unfortunately, the book is mostly a rendition of low-level juvenile delinquency—a repetitive litany of drinking and driving and avoiding punishment. Written conversationally, rather than as a carefully crafted work, the serial mention of car makes, near-crashes and drive-ins, quickly grows tiresome.

As such, the book is unlikely to appeal to general readers, although Jones’s friends should enjoy the retelling of their youthful indiscretions.