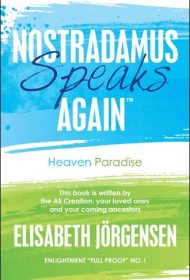 Hoping to bring readers to “another level of profound,” a variety of voices with names familiar to any New Age adherent and pop culture fan try to explain New Age beliefs about eternity and disease, to name just two. Admitting up front that, “we will of course not write in common sense language,” Steve Jobs, God the Creator, Lucifer, Michael Jackson, Elvis Presley, Elizabeth Taylor, Nostradamus, John Lennon, Whitney Houston, and Sitting Bull each encourage readers to do the work of fostering free will, ridding oneself of fear and self-doubt, and other beneficial self-empowerment practices.

Additionally, a short incantation that isn’t attributed to any one voice is repeated, with miniscule variation, more than a dozen times throughout the book to remind readers to dwell in love and speak the truth in the here and now.

The complex, creative entities quoted in in this book may very well have had significant words of wisdom to impart, each in his or her own unique way. But no voice here is distinct from another: Sitting Bull says, “See yourself as me.” John Lennon says, “SEE US AS YOU.” Lady Diana says, “I was YOU and You are Me.” The book is a formless, drifting, and monotonous amalgam of New Age beliefs.

Using the well-known seer Nostradamus in the title is a promise never fulfilled. There is never an explanation of Nostradamus’ life and work beyond this one sentence: “Most of his previous Audience [sic] knew him as one of the challenger’s [sic] of time procrastination.”

In sum, this will only confound spiritual seekers looking for insight into Nostradamus’ work, and even New Age seekers in general will come away with few rewards.