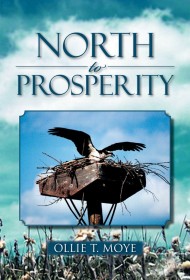 Matt Tolliver has a temper. That much is established in the first few sentences of Ollie T. Moye’s first novel, North to Prosperity. “You’re going to kill somebody with that temper of yours. But it ain’t going to be me,” screams Matt’s wife, Lisa, as she storms out of his life for good. Thus, the stage is set for this tense thriller, a story that propels readers into the dark world of a troubled loser who finds that the best way to get ahead is to kill the people who get in his way.

Lisa has paid for Matt to get his real estate license, and he had kept her in his life with promises of how things would turn around when he began selling houses. But there are no commissions yet, and Lisa is done with their shabby home, the empty promises, and most of all, Matt’s barely contained temper.

With her leaving, Matt decides to reinvent himself, and for a brief time, he does. His best friend, successful realtor Mark Abernathy, generously gives Matt some listings. His first customer is a beautiful woman who is struggling in her marriage and whom Matt believes is attracted to him.

Readers are given bold clues of what’s to come from the beginning of the story: mentions of guns that Matt keeps stashed; thoughts he has of violence; glimpses of his temper. But because Matt has sane — even thoughtful — moments, readers are led to forget about his dark side, further swayed by his laudable aspirations. He wants to be like his successful friend. He wants to leave his shoddy life. In addition, he’s a man from a troubled childhood who never had a chance at a healthy relationship.

As the story unwinds, its twists and turns won’t disappoint, nor will its ending. Like all good thrillers, North to Prosperity is tautly written, fast-paced — and hard to put down.