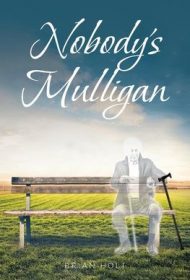 In Nobody’s Mulligan, Brian Holt presents a supernatural allegory about good versus evil, setting his tale in Grace’s Parrish, a once-good town now rife with debauchery and deplorable deeds.

Readers are introduced to three golfers: Brian Thomas, Paul Kessler and Michael Sheppard. Paul is an evil man intent on bringing Brian into his malevolent public relations firm. He tries to convince Brian by saying “No more mulligans in your life. Nothing second rate.” But Brian resists his entreaties.

We then meet other characters, including Margaret Sullivan, a good woman who was raised by her two kind grandparents after her mother died in childbirth; and two of Paul’s bosses, Lyle Sloane, who saves his own soul by leaving the firm, and Craig Templeton, a slovenly mailroom clerk who replaces Sloane as president by making a deal with the devil. When Satan instructs Templeton to entrap Margaret in his snares, the story’s central conflict is set.

Holt’s writing can be beautiful, but it’s hampered by occasional preaching and long, wordy sentences, such as: “Templeton was a wordsmith, having impressed her with his responsiveness, creativity and successful dissolution of her negative publicity followed by his offering her the reclusiveness of his home, which led to a more exclusive attention.”

And while some of Holt’s characters are well drawn, others lack nuance: for example, the bad guys frequent a bar managed by a man named Joey Vile, and most women characters, except Margaret, are evil temptresses in stilettos. Christian readers might also be turned off by explicit depictions of evil (i.e. when the devil graphically sodomizes Templeton).

Technical issues often distract, such as Holt’s use of myriad substitutes for “said” when attributing dialogue (“exalted,” “blurted,” “whispered,” “chided,” “deduced,” etc.). And the author confuses readers by referring to characters by first and last names, first name only and last name only.

Nonetheless, Christian readers will find the plot engaging, and Holt rewards his audience with a lovely ending, complete with a surprise.