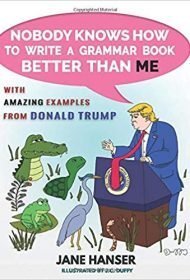 Grammar rules only make sense in the context of real language. Grammarians either elect to use famous quotes, or to construct their own pristine phrases for instruction. Jane Hanser’s innovation is to present grammar through quotes from President Donald Trump, delivering a well-sequenced grammar guide for the intermediate writer/English language learner already aware of grammatical terms.

Hanser has gathered over 800 Trump quotes from myriad interviews, speeches, tweets, and   texts spanning 26 years. They reveal an unadulterated 45th president trumpeting about all manner of subjects, including golf courses, border security, and women, with Hanser using them to teach appropriate grammar. For example, Trump’s “When you’re a star, they let you do it” is indeed a complex sentence with a subordinate clause preceding a main clause which requires a comma. His statement regarding allegations of Russian interference in the 2016 election that “I don’t see why it would be Russia” (later amended to “wouldn’t”) serves as a powerful lesson on the role of modals.

The author covers everything from parts of speech and sentence structure to conditional sentences and passive voice, skillfully addressing both the correct grammar and imperfections of the president’s language, then following them with exercises for readers.  Her reference is bookended by a table of contents and a detailed index of grammatical points. Sources are listed alphabetically; frustratingly they aren’t connected to specific quotes to allow readers to learn their context.

It’s difficult to determine Hanser’s target audience. The overlay of grammar onto the president’s familiar speech is interesting and well executed, but it won’t satisfy those with partisan leanings, as the author doesn’t seem to take a clear viewpoint on the president.  Meanwhile, readers serious about learning grammar will find that the exercises are uneven and don’t always exemplify Hanser’s points. Also, because there’s no answer key, it’s doubtful learners could successfully work independently through the exercises toward more coherent writing.

Hanser’s idea is clever—but she needs to identify her base as well as Trump has his before that idea can truly succeed.