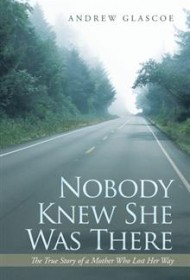 Tethered to a feeding machine, Margaret (Maggie) McGregor clings to the final dismal stage of Alzheimer’s Disease as her son Andrew Glascoe observes and waits, unrecognized by his own mother. Realizing his memories of her early life are fuzzy with “a few gaping holes,” the author sets out to reexamine her life in this intimate and subtly powerful memoir.

Between visits to the hospital near Toronto, “a refuge for the elderly, the demented, and the dying,” Andy unearths Maggie’s backstory from family members. While he recalls being embarrassed by her peculiarities, he learns that others had darker thoughts about this Scottish working class girl, who both caused and endured suffering through both the impact of World War II and intense personal issues when she later emigrated to Canada. Her “mean and crazy” behavior appeared long before her Alzheimer’s diagnosis in 1984.

Glascoe’s story engages readers through writing that sparkles like crystal and a sharp eye for detail. Here he observes his mother’s withered body: “The skin around her thighs is as unblemished as a baby’s, but it lies so slack across her knee joints that it could be used to demonstrate a lesson in anatomical bone structure and has loosened so much that it has gathered into numerous folds like a pair of old socks around her ankles.”

Equally potent are the author’s revelations of internal conflicts regarding whether he is doing the right thing by letting his mother linger. His thoughts are described as discordant advice whispered by a “benign Zen monk and a ferocious madman” who live in the cave of his mind.

This is a compassionate, penetrating and fluid account of complicated family dynamics — a true standout written with prose that shimmers. Nobody Knew She Was There is bound to draw a broad audience of readers who have been through similar situations and will find themselves nodding their heads in recognition.