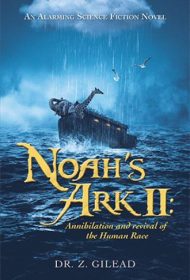 Dr. Z Gilead’s latest (after 2011’s A World of Soma) is equal parts apocalyptic fiction and environmental cautionary tale that chronicles humankind’s last desperate attempts to save itself from ecological disaster.

The story is set initially in the year 2024, with the planet on the verge of widespread environmental collapse due to global warming. Two philanthropic businessmen, Bill Just and Walt Beaufort, create a non-profit organization called Noah’s Ark with the purpose of enlisting the best and brightest scientists to devise ideas to eliminate greenhouse gases. The strongest proposals will be financed and developed quickly, as every passing day brings the Earth’s population closer to annihilation.

With John Roberts hired as the organization’s spokesperson, Noah’s Ark begins sending out announcements to the world. But each exciting announcement of the acceptance and advancement of a new proposal—from seeding the troposphere with nanoparticles capable of absorbing carbon dioxide to the use of neutron bombs—is inevitably followed by an announcement of its failure. With the oceans rising and time running out, Noah’s Ark is forced to implement an emergency plan.

The novel’s apocalyptic premise is an obvious hook, as are the numerous scientific ideas to eradicate greenhouse gases. Unfortunately, the narrative falls flat, in large part because of its structure. The multitude of press release-like announcements make for an emotionally detached reading experience, as the author “tells” rather than “shows” readers the action in progress.

Lastly, the story’s concluding chapters of the novel, recounting humankind’s final outcome, are sadly condensed, and the issue is glossed over in a few pages. Apocalyptic fiction fans will undoubtedly want more of this sequence.

In sum, while conceptually intriguing, the novel’s structure coupled with its lack of character development makes for an unsatisfying read.