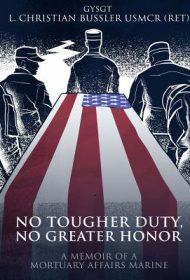 Retired USMC Gunnery Sergeant L. Christian Bussler’s No Tougher Duty, No Greater Honor is a powerful memoir of his three tours of duty in Iraq during the ongoing war against terror.

As Bussler details his experiences at war, he is exceptional at allowing readers to view the conflict through his eyes and emotions. He conveys, for example, the surrealism of being caught in an IED (improvised explosive device) detonation during his second tour, an incident that sent him home with shrapnel in his thigh, an ice-cream scoop size hole in his calf, and thankful he’d been carrying the unit’s radio, which had absorbed shrapnel that might otherwise have killed him.

The memoir is especially effective when the author concentrates on his third tour, a period when he did formidable work leading teams that recovered those killed in action. In one passage, he recounts plucking minuscule pieces of human remains from an armored personnel carrier’s interior, where body parts had melted into the aluminum alloy and blood had turned to dust. He recovered the fallen with diligence and the utmost dignity.

The narrative proceeds chronologically and focuses on Bussler’s American colleagues; there’s little here about the Iraqis. Bussler is unafraid to examine what he perceives as his own failings. And he offers straightforward, honest judgments of officers and other fellow Marines, some of whom he sees as incompetent or self-aggrandizing.

The author isn’t a stylist, but he does his subject as much justice as he did his military work. Regardless of one’s opinions about the war in Iraq, this is an eye-opening memoir that provides a potent, you-are-there reading experience—one that will engage thoughtful citizens and historians alike.