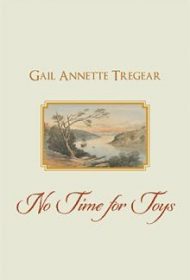 Journalist Gail Tregear’s great-great-grandmother Sarah Thatcher came to Australia at age four in 1818, when much of it was still bushland. In No Time for Toys, she describes Sarah’s journey from England and her challenging life in a new place.

Tregear details Sarah’s trip by ship with her mother and two brothers; her mother was aboard as punishment for possession of a forged banknote, but died on the voyage. Upon landing, the children were placed in an orphanage until their father, also a convict, was released and could collect them. From the Wild West atmosphere of the early 1800s to a gold rush that led to the development of the continent’s first urban centers, the author charts the family’s fortunes as they rise and fall.

Tregear writes in a straightforward, fact-based style with scant embellishment (with the exception of the opening scene, which is written novelistically). Footnotes tie the facts to source material. The narrative can be choppy, as Sarah’s story often falls away as new people enter her life and their backgrounds are introduced.

Still, the historical detail can be eye-catching. For example, at the orphanage, one girl who was caught in a lie and also climbed a tree—conduct deemed “wild” at the time—was punished by having “a log attached to her right leg.” A first-person account by a man who was robbed includes what was stolen (“a pair of pistols, a silver watch, a coat, three jackets…five gallons of brandy”) and the threat the robbers posed (“one of them stabbed me several times in the body with a bayonet…and said if I attempted to look at them he would run me through.”)

With its documentation-like feel, rather than creative nonfiction approach, No Time for Toys isn’t likely to appeal widely to general readers, Nonetheless, it will be treasured by Sarah’s descendants and useful to those interested in women’s roles in this place and time.