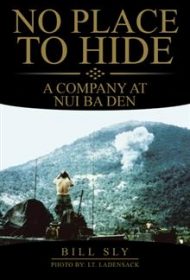 No Place To Hide is the story of a Vietnam War battle gone wrong, as told by the soldiers who survived it.

This was a battle that never should have taken place, based on false assumptions stemming from faulty intelligence. The year was 1969; the setting, the base of the Black Virgin Mountain, an extinct volcano rising 3,234 feet above the mostly flat Mekong Delta, a superior vantage point that made it a strategic location.

On the night of July 11, the Air Force bombed the north side of the mountain where concentrations of North Vietnamese were believed to be. The following day, orders were issued to a small infantry force to head up the mountain. This proved a strategic blunder, as the soldiers immediately became targets for North Vietnamese snipers hiding in trees on higher ground. Without adequate cover or firepower, according to author and unit historian Bill Sly, 11 men were killed over a two-day period. An additional 51 were wounded.

The narrative is pieced together from the perspectives of the men who were there. While very affecting, at times, the many voices and recollections mirror the chaos of the battle itself: With so many people explaining their experiences, the narrative often becomes cluttered and unfocused and would have benefited from thoughtful editing. The sheer volume of narrators – many identified by nicknames – poses a further challenge (although Sly includes a glossary of nicknames to help).

Additionally, despite a glossary of military terms, No Place to Hide has an abundance of jargon that will make it challenging for civilians. (“B½ set up their RO about 1½ klicks northwest of Nui Ba Den.”)

Democratically – and often heartbreakingly told – No Place To Hide seems written less for average readers than to honor the fallen and the survivors whose stories it tells. What shines through, along with the soldiers’ bravery, sacrifice and regard for their brothers in arms, is the terrible cost of war.