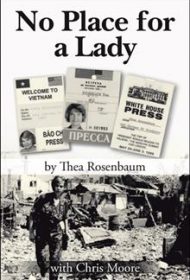 Thea Rosenbaum is a master storyteller whose memoir recounts a life marked by wars she experienced firsthand.

Whether as a child in ravaged Berlin at the end of WWII, or dodging bullets as a reporter in Vietnam and Cambodia, Rosenbaum lived amid the dangers of countries in conflict. She worked beside journalism’s elite, later rubbing elbows with entertainers and top politicos while stationed in Washington, D.C. Throughout her narrative, she deftly sets each scene, enthralling readers with this vividly drawn, often tense drama.

Rosenbaum was born in Berlin in 1940. Her mother and father—a German soldier captured by the Russians—reunited in East Berlin after the war. Post-war years found her standing alone, at age five, in long food lines and collecting briquettes discarded in the railyard for heat. At six, she went to the countryside to live with her grandparents but returned to her parents after repeated sexual molestation by her grandfather.

In 1962, she married an American G.I. and journalist. Following him to New York, then Saigon in 1966, she hired on as a reporter (and later, producer) for a German news service, a job she kept for 30 years. The book’s title echoes a phrase she often heard as a war correspondent.

Rosenbaum cleverly juxtaposes her past and present, weaving her adult observations as a journalist with her memories of wartime Berlin. Her story opens with her and her mother hiding from Russian soldiers as Berlin falls. Later, as a young reporter in Vietnam, she describes an elderly civilian prostrate on the ground before her, begging for help. “These people must hate us,” she reflects. “They are so full of horror and fear”—the same emotions she felt as a small child in WWII. Even as her career culminates in the relative safety of the White House, her narrative remains exciting.

The author witnessed a significant chunk of American history through the lens of a foreigner (she became a U.S. citizen in 2013) and has turned it into a captivating adventure. Rosenbaum’s fast-paced, evocative writing is sure to keep readers eagerly turning pages.