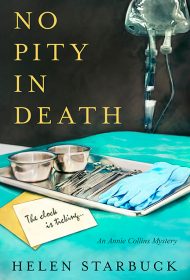 In this second book of her Annie Collins Mystery series, Helen Starbuck puts her title character through an emotional and physical wringer.

Operating Room nurse Annie Collins is still reeling from her near-death experience in The Mad Hatter’s Son, and even though her attempted murderer, Ian, is in jail, Annie is suffering from post-traumatic stress disorder. Meanwhile, at work there’s a spike in deaths at the ICU step-down unit. Taken individually, the incidents aren’t remarkable: terminally ill or elderly patients with Do Not Resuscitate orders passing in the night. But examined together, the numbers are concerning, so the hospital asks Detective Alex Frost to investigate. He, in turn, recruits Annie’s help.

At the same time, Annie’s relationship with her friend, neighbor, and resident Casanova—Assistant District Attorney Angel Cisneros—is evolving into something more complicated. When he winds up a target for revenge, Annie is determined to find the culprit.

Starbuck’s efforts to address Annie’s PTSD are admirable; her character doesn’t just shrug off a harrowing life experience and move on. However, that plot element seems to drop off about midway through the book, as though Annie is simply cured. This is likely due to all the other plot lines Starbuck is trying to weave through the novel. But instead of braiding the threads together for a strong story, the author allows them to fray (like the PTSD), weakening the overall narrative.

The novel also offers too much superfluous detail, such as Annie’s acquisition of a handgun, that distracts from the novel’s central theme. Trimming these passages would have tightened the plot and improved the story’s pacing.

To enjoy No Pity in Death, mystery fans must be willing to overlook some missteps. But it will certainly pique their interest and provide rewards throughout.