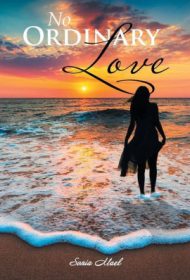 This compelling love story spans pre-WWII Malaysia to 1970s England, offering a glimpse of two star-crossed lovers who seemed bound for heartbreak— but destiny may have other plans.

Newcastle University student Katarina (Kat) and Josh fall in love at first sight on campus, but Josh’s flashes of violent jealousy convince him to leave Kat and embark on a spiritual adventure to “cure” himself. This sacrifice, and the ensuing drama it causes, changes both their lives forever. The narrative also flashes back in time to examine the love story of Kat’s Malaysian parents, Suraya and Malek, and ultimately returns to the present.

No Ordinary Love’s characters are interesting and likeable. Through them, readers learn about Malaysian history and culture, from the delicious-sounding food to the rich language and the importance of Islam in daily life.

But the dialogue can at times be choppy and unrealistic, such as when Josh tells Kat: “Please forgive me, Kat. It just assailed me all of a sudden. Before I realized it, I had given way to my frustrations and anger that had been simmering while we were at the party.”  There are also many instances when the prose sounds equally wooden, such as when baby Kat fusses: “One evening Katarina was feeling unwell and creating much disharmony.”

Occasionally, there are typos or incorrect facts, such as when the two atomic bombs the allies dropped on Japan in 1945 are referred to as “Little Boys and Fat Boy,” when the correct nicknames are “Little Boy” and “Fat Man.” And while stories about domestic violence are important, some might question the idea that domestic violence can be fully “cured.”

No Ordinary Love is not as polished as it could be, but the story is entertaining, and, despite the narrative’s flaws, the author’s message about love spanning time and space will appeal to many romance readers.