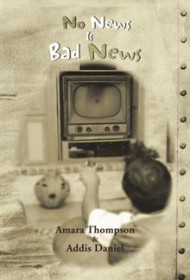 The idea behind No News Is Bad News, a screenplay published in paperback form, is that broad comedy can be mined from television news reporters promoting themselves by creating the news they subsequently cover.

It’s a neat idea, if not entirely original — the brilliant TV series Mr. Show with Bob and David nailed it with a bit called “We Make the News” 15 years ago — but serious flaws make the conceit hard to appreciate here. A determined reader will discover some smart, creative touches in parts of No News, but that’s after digging through extensive structural and grammatical errors that make it a taxing read.

The back cover copy notes that No News was written by two University of Central Florida students. It also notes the setting of a North Dakota “super-suburb,” some basic plot details, and brief profiles of the main characters: young news reporters BJ and Victor. That information is helpful because little of it is established in the script itself, which only loosely emulates actual screenplay format.

The most noteworthy aspect of No News is that virtually every character unleashes a torrent of profanities, vulgarities and slurs throughout the story. That makes sense in certain stories, but even in this broadly satirical world, it comes off as bizarre and off-putting. That’s unfortunate, because while the authors are amusing in some scenes, even the stronger bits are obscured by the unremitting crassness.

The text itself is rougher. Lacking even a basic proofreading pass, it’s a textbook example of a manuscript published before it’s ready. While No News has its problems, Thompson and Daniel are energetic storytellers, and it would be interesting to read a future story that married their creativity with substantially improved craft.