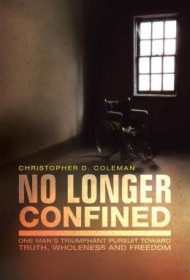 Christopher D. Coleman’s memoir begins at his birth, when he spent the first 15 minutes of life not breathing. He offers a powerful intimate portrayal of living with the resulting cerebral palsy, unable at first to move, communicate or control frequent seizures. The book is characterized by conversational storytelling often peppered with humor, all overlaid by his strong Christian beliefs.

In a small town in late-1970s Louisiana, Coleman’s mother already had five children when she delivered him and his twin sister. Although his sister was fine, doctors told his mother that if he survived, he would be crippled, mentally impaired and spend life “between a bed and a wheelchair . . . gripped by seizures.” This was too much for his father. Coleman unsentimentally writes: “She took me home. He left.”

His older brothers took good care of him while his mother worked. But others, including paid providers, didn’t. He was abused, neglected and sexually molested before he learned to speak. (His first word was to his molester: “Stop!”) His family discovered he could read, and he started school, where he made friends and impressed teachers with his intelligence.

As Coleman grew up, his abilities increased, as did his self-awareness. He became the first in his family to graduate from college and writes frankly of being a black man in the American South with a disability who eventually embraced his homosexuality. This may be a lot for readers to take in, but some will find Coleman’s message of determination and tenacity well worth the effort.

Coleman struggled with being labeled “disabled” and feeling patronized by friends, his church and society in general. By his story’s end, he has reconciled how others may see him with how he feels about himself. While his book, with its candid discussion of his sexuality and a number of grammatical errors, isn’t for everyone, it rewards those willing to hear its hopeful message not only of fortitude but forgiveness.