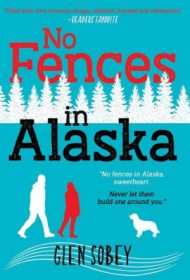 Ruin, redemption, love and forgiveness are themes that weave themselves beautifully together in Glen Sobey’s young adult novel, No Fences in Alaska.

The book centers on the lives and trials of the Lyons family, particularly Harper Lyons. Harper is the 16-year-old wild child of extremely strict parents; her father, Greg, is headmaster of a conservative Christian academy in San Antonio. She is also the granddaughter of the crazy, artistic Cooper Lyons.

When the novel starts, Harper is rebelling with drugs, sex and partying, and after a feigned suicide attempt, possible date-rape and pregnancy, she runs off to Alaska to be with her grandfather, whom she hasn’t seen for a decade. Cooper himself is fighting the onset of dementia and has been living with the regret of a daughter who died of a drug overdose and a failed marriage. As Cooper and Harper’s relationship develops, they help each other to heal and grow.

Simply put, this is a gorgeously written book. The characters are believable and well developed, and their dialogue rings true. While some plot points can seem contrived, readers will buy into them because of the characters’ believability. One of the main characters, in fact, is the setting of Alaska itself: “The trees lining the open field had recently sprouted leaves, fluttering in a rich unblemished green, lighter than the dour spruce needles nearby. For those who had endured the long winter, green-up was the most magical time of year.”

Unfortunately, the story doesn’t fit neatly into a single genre, which could impact its readership. While its perspective is slanted towards the Christian faith, it also includes profanity, premarital sex and drug use, among other divergent thematic elements.

All told, readers will find No Fences in Alaska impossible to put down.