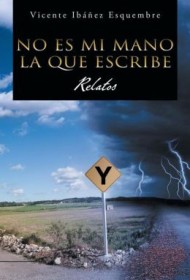 No es mi mano la que escribe features 14 imaginative stories that share various thematic elements, such as desire, indifference, love, hate, death, and the occasional appearance of a supernatural creature. Some plots take place in the present, while others travel back centuries and are set in cities such as Salzburg, Venice and Salamanca.

The stories are uneven in length—the shortest is two pages and the lengthiest has 56—and strength. Among the best is “El verdugo,” in which a mystifying creature of 16th century Venice, who no one has ever seen but some say has fiery eyes, feeds on a bizarre diet, leaving its victims empty husks. Another is “Atributos,” a tale about the strange relationship between a young man and his mother. Both of these stories have been polished to a higher sheen than the others, resulting in a more immersive reading experience.

Others, such as “Inmortal,” are weaker and contain implausible situations. In this story, a woman who beds and kills men in order to stay young, turns over in the middle of coitus and plunges a knife into her partner’s heart. Given that she was on all fours, this could only have been done by a contortionist.

For the most part, the writing is descriptive, the dialogue is believable, and many of the characters are memorable, such as the lonely, sad doctor of “La huida,” who encounters a mysterious and desirable woman on a deserted beach. However, although the author writes ably, there is problematic punctuation (for instance, the misplacement or overuse of commas and the inexplicable use of italics and exclamation marks in some of the dialogue) that a thorough copyedit might have avoided.

Despite this, the book is recommended for adult readers seeking satisfactory stories on a cold and windy evening, and who don’t mind bumping into a strange creature or two.