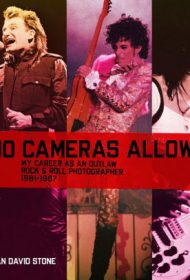 At $60, No Cameras Allowed is not a cheap read, but for music fans it may be priceless. This coffee table book is full of rich, glossy images capturing a brief, exciting era of rock concerts in the ‘80s, all taken by the author, a self-described “outlaw photographer.”

Julian David Stone’s story begins when he’s about to attend a Ramones concert with a brand-new 35mm camera, when a security guard tells him: “No cameras allowed.” As Stone returns to his car to stash his equipment, he has the sudden impulse to be the visual equivalent of the punk-rock Ramones and sneak his camera in. Screw the rules! He hid the camera body in one sock, the lens in another, and film down his crotch – a place he assumed would be safe from security guard pat downs.

The book shares the atmospheric black-and-white shots he took that night, along with photos of other artists he captured nefariously on film: Tom Petty, the B-52s, Jerry Garcia Band (and later, Grateful Dead), U2, Elvis Costello, Joan Jett, The Cars, David Gilmour, R.E.M., Bruce Springsteen, Chuck Berry and more. Many were and still are superstars; others are largely forgotten. While the quality of photos varies—some capture the perfect moment in sharp detail; others are blurry or grainy—as a composite, they evoke an era many remember as the time of their lives.

Stone’s text, while scant, is nicely composed, offers amusing behind-the-scenes stories, and reflects the spirit of the era: “Every town with a rock and roll scene always had a band just on the verge of national stardom,” he writes. “Watching them tear it up in some tiny club, you knew you’d very soon be joining the ranks of those lucky few who got to say they saw the Beatles at the Cavern Club, or the Talking Heads at CBGB.”

In all, No Cameras Allowed provides an enjoyable trip down memory lane for ‘80s music fans.