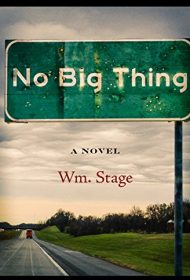 No Big Thing is a fascinating novel based on the true account of the application by the Ku Klux Klan to pick up trash along a stretch of highway in St. Louis in the 1990s. In this telling by veteran journalist Wm. Stage, the application is made by a small-town Missouri patriarch with ties to the Klan.

The central character is former Klan member Randall Fortner. His main reasoning for making the application revolves around his perception that the Klan’s image needs a PR makeover: “The new Klan is about civil rights for white folks and respect for Southern heritage and culture,” he intones at a family meeting. Little does he realize the firestorm of opposition and public resentment his application will elicit.

Throughout the book, Fortner holds forth on a wide variety of topics, revealing a deeper sophistication than one might expect from this historically denigrated demographic. On the future of white ascendancy in general and Randall’s revered Confederate flag, in particular, for example, he realizes both might be ultimately doomed. He tells his wife: “I feel like an old horse being put to pasture. I may as well go out to the barn and move in.”

The backstories of the book’s ensemble cast dip and weave adroitly through the story. There’s Birch, Randall’s one-tour Iraq war veteran grandson, still in search of a life’s purpose; daughter Patricia, estranged for years from the old man but achingly in need of reconciliation; and Randall’s former Klan cohorts.

Stage’s narrative touches on the theme of the country’s widening racial gap and suggests that millions of Americans might be quietly seething white supremacy “honorary Klansmen,” on the brink of open rebellion. It’s a startling and timely premise to a well-written story—one that includes Old South traditions and dirt-road romances, with a healthy dose of beer joint camaraderie thrown in for good measure.