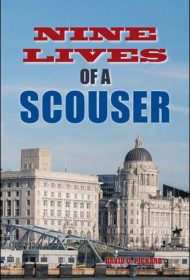 For more than a half century, David C. Pickard had an inside view of England’s post-war industry. He tells his story in Nine Lives of a Scouser. (Scouser is a term for a native of Liverpool, where he was born in 1937.)

Pickard skims through his childhood in just six pages. Much of the book recounts the everyday events in his career. He worked at a shipbuilding company, a hydraulics laboratory, Ford Motors and other firms, starting as an office boy, moving into management, and eventually founding a highly successful tool rental business.

Pickard tells some wonderful stories. For example, as a shop foreman, he once had an employee who often took sick days. Suspicious, Pickard decided to play detective. He ran a spreadsheet showing the employee’s absences. Then he ran another showing tournaments at a local golf club. He overlaid them; the dates matched up exactly. The employee was sacked.

Later in Pickard’s career, when he owned a tool supply business, he saw a TV report of a nearby plane crash. There was hardly enough light at the scene to make out the TV images. He quickly loaded up his truck with lighting equipment and other tools from his business and drove to the crash site, where he supported the rescue and recovery efforts.

Such stories are highlights of the narrative. Unfortunately, they are rare. Meanwhile, other issues also impede readability. Pickard references people and events that require further explanation and context. He throws out terms (“steel hawsers,” “snort valve,” “death items”) that could use clarification, with the jargon becoming daunting at points: “The machinery under my watch was all the transfer lines and the multispindle bar autos that produced all the gear blanks prior to gear cutting.”

Overall, this is an informative but uneven account of Pickard’s experience in British industry from the 1950s to the start of the 21st century.