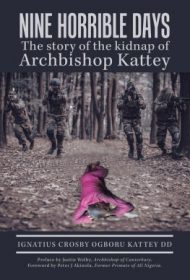 Author Archbishop Kattey of Nigeria was the victim of a terrifying terrorist abduction in September of 2013. In Nine Horrible Days, he chronicles his experience.

Kattey holds a high position in the Anglican Church of Nigeria and at the time of kidnapping would have been easily recognized—and an easy target. When he and his wife were travelling by car, a group of young thugs carjacked the vehicle and took them to a remote location in the bush. They released his wife, who had to walk back to civilization in the dark. But they kept the archbishop for nine days, forcing him to lie on the wet ground, with only minimal food and water.

The archbishop spent his time in prayer and worship of God. He occasionally had opportunities to negotiate for his release. Eventually, the thugs set him free to walk to a place where he was given a motorbike ride home. He never saw his captor’s faces or knew their names—or who directed the abduction.

While the author surely suffered a terrible ordeal, readers expecting a memoir fully recounting its details will be disappointed. The account of the kidnapping is told in a mere 20 pages. The rest of the narrative (over 80%) consists of text devoted to long sermons, addresses, prayers, copies of legal documents related to the subsequent trial of the perpetrators, and newspaper stories from around the world. The intent seems to be to augment Kattey’s horrific experience and to demonstrate the power of his faith and the faith of his wife, family members, and church leaders. While well intentioned, however, the disproportionate amount of such material renders the title misleading.

Those seeking a gripping tale of survival won’t find it here. Still, the memoir has historical and cultural value (in addition to demonstrating the author’s deep and sincere faith). Western readers might also find the references to voodoo, juju, and other such practices of interest.