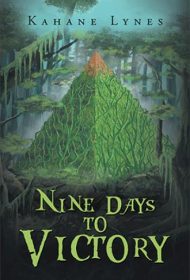 Set in the 1990s, the story recounts a battle between an Indian tribe, which seeks to retain its rights to a gold mine located on a “Magical Island,” and the Americans who have controlled a stake in the mine for 70 years in exchange for developmental aide and support. War ensues when the Americans renege on their agreement to withdraw from the island after the allotted time span.

The story is presented as a dialogue between an Indian, Commander Bailey, and an American, Mr. Thompson, and becomes a metaphor for the impact of Western ideals on Indian tribes. Lynes captures this dynamic especially well when Bailey says that Thompson has been “taught how to forget” humankind’s symbiotic relationship with nature. He skillfully portrays the jungle as a living presence; for example, breadfruit trees literally come to life and punish marauding soldiers who murdered Commander Bailey’s son.

Unfortunately, many characters are introduced without sufficient background or explanation, particularly “66,” who appears to be a villain seeking to control Earth’s population (although his motivations are unclear), and “6273,” a mythical creature aiming to defeat 66 (whose motivations are similarly obscure). Another character, Eve, is joined by a multitude of others to “assist her in her battles to restore peace to the universe.”

These fantastical elements dilute the book’s fundamental lesson about native and colonial cultures’ differing relationships to nature, and the many characters and plot complications become confusing.

In the final pages, the dialogue format breaks down, when, in a confusing twist, Mr. Thompson leaves and is replaced by Commander Bailey’s own son. Additionally, the book contains typos and grammatical errors, and the last two pages appear to begin an entirely new story.

In sum, the story requires revision with an eye to correcting the issues mentioned in order to appeal to a wide audience.