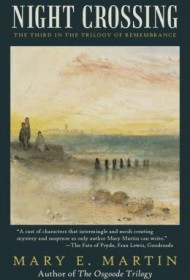 Frustrated with his usual bucolic paintings, Wainwright cannot escape the hold that a vision of what he dubs the “cosmic egg” has on him. This jewel-encrusted orb glitters and hovers just out of reach from him before disappearing, leaving him to believe that it foreshadows a breakthrough in his work. When Jamie Helmsworth, his friend and art dealer, shows him an unsigned painting of the same image, Wainwright sets out to find the artist, with whom he feels a connection.

His mission takes him from London to Paris and St. Petersburg, but his journey is less about the geography than the internal mapping of his quest for spiritual fulfillment, both in his art and personal life. As he is ambivalent about committing to muse and girlfriend Daphne, she, too, questions their relationship. Amidst a string of coincidences and calamities, including a capsized ferry, an erroneous cremation, and strange apparitions, Wainwright pieces together not only the mystery of the painter’s identity but his own perspective on the creative process and meaning of life.

Martin deftly weaves together well-drawn characters and storylines that pull together elements of romance, adventure, and mystery. The novel’s atmosphere is infused with a rich sense of the various locales. Her use of Helmsworth as an occasional narrator, though, can feel heavy handed, as when he advises, “If you are like me, you may find that some of the events strain your credulity. … I assure you it is worth the effort, as they say in the literary world, to suspend your disbelief.”

Nevertheless, Martin has crafted an intriguing foray into the artistic soul that will appeal to fans of this trilogy and also works as a standalone novel.