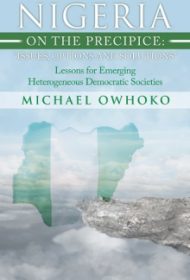 Perhaps no African country is more likely to fly apart under its own centrifugal forces than Nigeria. In his book, Michael Owhoko describes the historical reasons for what he sees as Nigeria’s imminent dissolution, and recommends a political solution to preserve the country.

According to Owhoko, Nigeria’s problems began before it was a country when, in 1914, the British combined the northern and southern protectorates into one unit, the Colony and Protectorate of Nigeria. In doing so, the British took no account of the cultural heritages and allegiances of the people involved. Thus, when Nigeria became an independent country, it inherited disparate groups defined by special interests, who jockeyed for political control.

Owhoko traces the country through its various constitutions, military takeovers, elections and revolution to show how most of the resulting governments were unable to put an end to the conflicts and their underlying inequities. The one time-period that he looks favorably upon was when “Nigeria could be said to have practiced federalism in the first republic from 1960—1966.” Here the republic gave each region “a considerable level of autonomy,” empowering the country’s “diverse cultural and ethnic” groups. Owhoko advocates a return to a similar form of government.

Owhoko’s arguments have logic but often lack the supportive detail that would make them persuasive. For instance, he states that “Nigeria has not been able to conduct an acceptable census due to manipulation” but does not explain how the censuses were

manipulated or by whom. He frequently laments the proclivity of whatever leader is in power to unfairly favor his own ethnic group, but, with one exception, doesn’t give detailed examples of the results of this alleged favoritism. The author’s text also includes frequent word misuse (i.e. “exposition” for “exposure”; “share” for “sheer,” and “primordial” for “early”).

Owhoko’s book deals with an interesting and important topic. With expansion and editing, it could appeal to readers interested in political history and the plight of Nigeria.