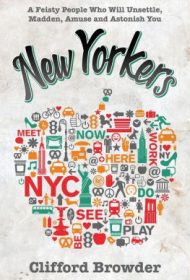 New Yorkers, Clifford Browder’s tenth book, is a beguiling ode to the city he loves.

Browder, 92, fled Evanston, Illinois in 1953, and after nearly 70 years in Manhattan as graduate student, college French teacher, novelist and freelance editor to big-name publishing houses, he has earned the right to linger over the things that continue to fascinate him about his adopted hometown. Yes, the city smells, is covered with graffiti and teems with people who seem rude and rushed. But it’s also the heart of America’s financial, architectural and cultural worlds and boasts an ethnic diversity that adds to its vibrancy: As many as 800 languages are spoken in the city, and bloodlines include Basque, Sikh, Tibetan, Romani, Sherpa and Mohawk.

Browder has spent decades walking the city’s streets, researching its roots and uncovering obscure facts. One employee spent 30 years keeping the 800 light bulbs lit in the Statue of Liberty’s torch, for example, and gay S&M clubs The Mineshaft and The Toilet were razed to make room for the new Whitney Museum. The author brings to life the docks, the Bowery, and the power brokers like J.P. Morgan whose names are inscribed on landmarks. Yet he writes with equal authority about a Broadway chorus boy he knew in the 1950s.

In the book’s most touching chapter, Browder examines the ways people pass away in a city of 9 million; for example, contrasting the folks who die alone in their apartments with the day his longtime partner, Bob, died from Parkinson’s disease in their West Village high-rise. Grief is palpable beneath the unsentimental prose, as well as his attachment to The City That Never Sleeps. “That’s how I’ll leave this place, when the time comes,” Browder told the hearse attendants who strapped Bob to a stretcher. “Horizontally, not vertically.”

Thousands of books have been written about New York City, but this one stands out. Browder has a keen sense for interesting stories, the research skills to flesh them out and the writing chops to transform them into great tales. Read the book with a good NYC map to sop up every last savory detail.

BlueInk Heads-Up: This book is given a Star designation with the recognition that some typographical errors remain in need of attention.