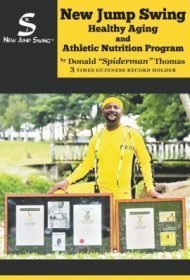 Although the book title references an athletic and nutrition program, only one section is dedicated to exercise using a type of jump-rope, an inclusion that explains the program’s name. The nutrition “program” isn’t what most readers would consider a program, either. Instead, the book basically advises people to eat more vegetables and fruits and avoid meat and fish and presents readers with reasons they should adopt a vegetarian lifestyle to age in good health. Some readers might prefer more specific meal plans and/or recipes.

Thomas, who holds three Guinness World Records—two for giving the longest speeches and one for the longest sermon—is sometimes wordy, and he goes off on many tangents, including several pages devoted to his admiration for Bruce Lee; while interesting, it isn’t exactly on topic. Thomas includes supposition that Lee eventually embraced the veg-centric lifestyle, which might or might not be true.

A few typos—“advise” instead of “advice” and “their” instead of “they’re”—crop up, but they don’t detract from Thomas’ enthusiastic voice.

Despite its shortcomings, Thomas’ book makes an entertaining, informative case for going vegetarian, with views that are well researched, including 34 pages of footnotes detailing his investigation. Some readers might get frustrated that he spends most of his time on the “why” of going vegetarian (especially vegan) instead of telling them how to do it, but otherwise he presents a convincing, passionate argument for those aiming to make wise food choices to help them age well.