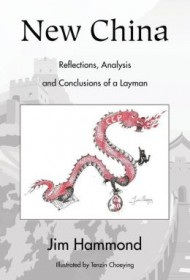 Jim Hammond spent 17 months in China in 2006-2007, and now he shares his impressions with fellow Americans, offering an essay (supplemented by a 42-page bibliography) that relies more on anecdote than rigorous analysis.

Writing as a “layman,” (as indicted by the subtitle) Hammond concludes that China’s socialist market economy is doomed to fail because the corrupt Chinese Communist Party “is now suffering from rot and decay.” The regime will collapse, he writes, when education and Christianity trump Marxist ideology.

Hammond may be right. But he doesn’t make his case effectively. Untrained in economics, political science or journalism, Hammond is simply convinced that “spiritual idealism” will one day bring “faith, hope and love” to a democratic China, and bases his view on vague readings of the Chinese zeitgeist. Example: “I sense from talking and observing, especially the young, that they lack purpose in their life and it is usually an unspoken feeling.”

Absent from Hammond’s portrait are some inconvenient facts: China’s $10 trillion economy continues to grow at 8-10% per year and could overtake the U.S. by 2016, according to the International Monetary Fund. China is the world’s largest exporter of goods, number one in farm output and, as of January, 2014, owns a whopping $1.3 trillion of American debt. Hammond correctly points out the country’s huge problems of graft, pollution and autocratic rule. But he doesn’t mention the World Bank’s estimate that two-thirds of the world’s middle class will live in China by 2030—hardly a recipe for Sino-despair or economic disaster.

Aside from basic errors of omission and fact (President Reagan’s “Evil Empire” was the Soviet Union, not China), Hammond struggles with word usage, for example using “indigent” when he means “indigenous”; “it’s” for “its”; “affective” for “effective.”

The writer means well, and fresh observations are welcome in any realm. But his claim that his conclusions on China “are as valid as any other authors have offered!” does not withstand scrutiny.