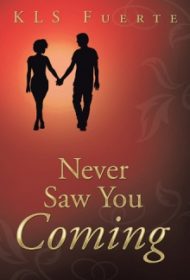 First time author KLS Fuerte’s Never Saw You Coming is a romantic thriller in which girl meets boy, only to find herself in a drastically deteriorating situation.

The story is told in diary-like fashion, with dates as chapter and section headings. Newly graduated from the Sorbonne and St. Ann’s College, Beatrice is just starting her career teaching French in Surrey when she encounters Edward, the school’s charismatic drama teacher.  The two fall in love, and Edward proposes. They marry, have a family, and all is well—or is it?

Things worsen and grow more complicated as Beatrice uncovers Edward’s secrets and begins to wonder if he was telling the truth the night before they wed when he told her “I am not a nice person, and you should not marry me.”

As she faces Edward’s infidelities and pushes back in unseemly ways, the plot leads up to a surprising climax and an ending that leaves readers hanging. It’s unclear if a key event has actually occurred, and Beatrice’s story is unfinished, leaving readers to wonder if there will be a sequel.

The ambiguous ending will be frustrating to readers, and the book is also greatly hampered by structural and grammatical flaws, including frequent tense changes, sentence fragments, and awkward phrasing that jolts readers out of the story.  For example: “Edward takes me to Covent Garden!  I have always adored its tranquil business and its cosy atmosphere. Covent Garden meant sweet joy to my Parisian love of inspiring walkways and pretty boutiques.  The ‘suitcase night,’ funny and surprising!”

These technical issues are exacerbated by passive descriptions in which Fuerte tells readers, instead of shows them, the story’s action.

Those who persevere will be rewarded with an intriguing plot. But revisions with an eye toward writing mechanics and active construction are required before the story is likely to appeal to a wide audience.