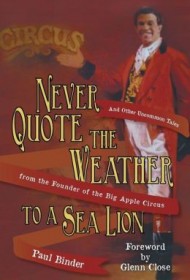 A month after his fourth birthday, Paul Binder watched the Macy’s Thanksgiving Day Parade from atop the shoulders of a tall stranger his mother had pressed into service to insure her little boy an unimpeded view. Six months later, mother and son sat in a Brooklyn theater watching Miracle on 34th Street. There was Paul onscreen, perched above the crowd on the stranger’s shoulders, the moment forever captured on film.

Binder went on to become a street juggler, traveler, circus performer, and ultimately, founder and ringmaster of The Big Apple Circus. Small wonder he believes he has led a charmed life. Any notion to the contrary should be put to rest by his captivating memoir, Never Quote The Weather To A Sea Lion And Other Uncommon Tales From the Founder of the Big Apple Circus.

Although the title is long, the chapters are not. A raconteur and showman, Binder tells his stories economically, with comedic timing honed over years of juggling “balls, clubs, Leonard the rubber chicken, a frying pan, even our hats and a shoe” with Big Apple co-founder Michael Christensen. The result is a collection of anecdotes that give readers a tangible sense of “the whole oddball life”: “Crossing muddy lots in worn clogs and white sequined tights. Routinely scraping resin crystals out of broken calluses. Waking up, eating, and sleeping only after the horses, dogs, and elephants have been cared for. It’s not an easy life, yet you’ll never meet a bunch of people with a more positive outlook.”

Binder more than holds his own in their rarified company, with a memoir sure to appeal to children of all ages.