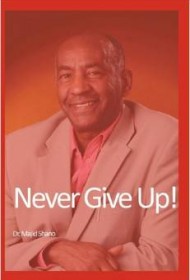 Dr. Majid Shano’s journey from disobedient truant in Ethiopia to respected physician in Germany is the stuff of which memoirs are made. Here, he retraces his unlikely path from his early childhood to his sports medicine practice in Waldmunchen by way of universities in Addis Ababa and Cairo.

The die was cast early for young Majid, who was teased by the other children for his small size. There was nothing small about his mouth. He baited his teachers and disrespected his father, who pulled the young rebel out of school and tried unsuccessfully to put him to work. By age 10, Majid put pen to paper and forged an invitation from relatives in Addis Ababa welcoming him to live with them. The ruse worked, and he left home for good.

He encountered his share of difficulties on his life’s journey: his father’s imprisonment as an enemy of the state; his own political activism that gets him banned from studying in Ethiopia; his struggle to assimilate and find acceptance as an African in Europe, and so on.

As he tells his story, Shano quotes often from a diary he has kept for most of his life. (“Majid, continue your battle patiently and optimistically; don’t worry too much!”) He also addresses readers directly. (“I can only recommend to each and every one of my readers: when faced with a crisis, hold little ‘conversations’ such as those I have mentioned with your inner self … “) The effect of all this advice is to disrupt the story.

The author credits a ghostwriter, and written comments between Shano and the ghostwriter that should have been deleted remain in the text. Punctuation is problematic and exclamation marks run rampant, making for a jarring read.

While Shano’s remarkable life is worthy of telling, these unfortunate challenges will likely cause even the most interested reader to give up on Never Give Up!.