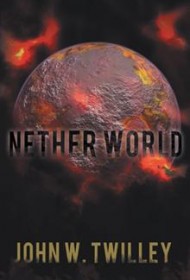 This science fiction novel detailing one man’s journey to the nether world to rescue his recently deceased wife and son is undeniably ambitious but falters because of two fatal flaws: the storyline suffers from a kitchen-sink mentality – there is a hodgepodge of mythological, folkloric, and scientific elements – and, first and foremost, the writing creates a difficult reading experience.

The structure of the story is promising. Set in modern day Oklahoma, Seth Jones is a computer security specialist who is perfectly happy with his workaday existence. He has a loving wife, a precocious son, and a baby on the way. He drives a beat-up ’92 Buick and works for a quirky boss named Nigel. But his life changes in an instant when an acquaintance – a business magnate named Charley Fulton – inexplicably names Seth heir to a multimillion-dollar company and places him in charge of a project that, if successful, could literally bring ghosts back to life.

Seth initially declines the offer, but after a car accident kills his wife and son and leaves him crippled, he is essentially forced into agreeing. However, he soon realizes the mind-boggling implications of this venture – and finds himself entangled in a grand scale conspiracy with nothing short of the lives of millions of innocents at stake.

The story ulitizes so many disparate elements (such as Atlantis, Valhalla, dragons, witches, Satan, UFOs , a Saurian empire , etc.) that they end up muddling the storyline. But it’s the clunky, mistake-laden narrative that ultimately dooms this novel. Some of the many typographical errors are unintentionally comical: “We’re going to raise up your bed so you can eat Mister Fulton.” And the lack of any narrative fluidity makes for a decidedly jerky reading experience. “Satan had wings. They were dark. He was dark, with eyes that were yellow and green snake eyes.”

In sum, this is a story with an interesting premise that falls well short of its potential.